Another favourite of mine this summer has been the album “Songs by Geirr Tveitt” by Slagr and vocalist Camilla Granlien. Performed skillfully by Slagr’s musicians (Hardanger fiddle, cello, vibraphone and tuned glasses, that is)  the songs fit beautifully into the open and subtle arrangements of  Sigrun Eng, my long time friend and cellist! 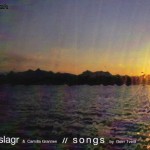 Geirr Tveitt was from Hardanger in West Norway, where nature and landscape remained an inspiration for him as composer, and gave sound to his characteristic folk influenced tunes. During his years in NRK (Norwegian Broadcasting Corporation), he composed music to the poems of many a Norwegian poet he presented on his broadcasts. Those works became some of his very best, and a selection is presented on this album.  Don’t miss it, “Songs by Geirr Tveitt” is nothing less than an evocative and wistful piece of Norwegian soul!

One thought on “So rodde dei fjordan…”